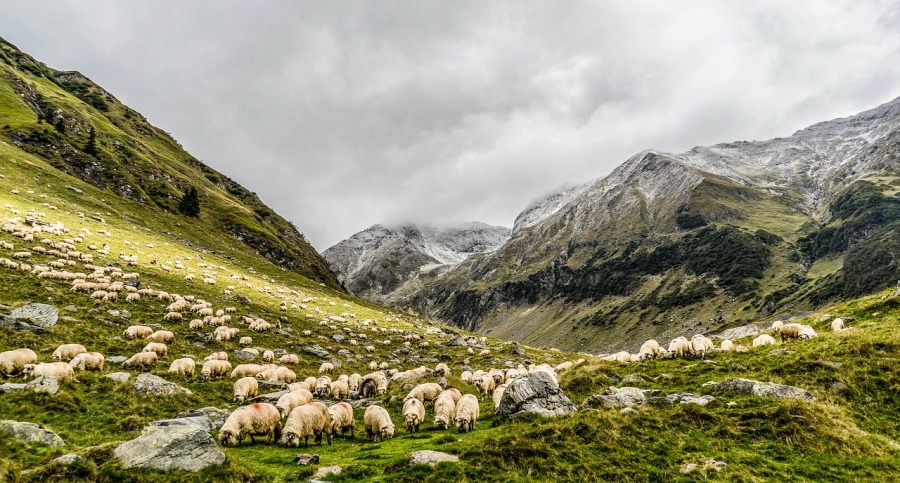 The flock ambled along the droveway, Mellena and Oran following steadily.
__It was late afternoon. They were discussing Mellena’s unfinished apprenticeship while making their way to the night yards. Oran encouraged her to take up again with Kengar. A pair of Molossus hounds walked before them, occasionally trotting forward to rouse a reaction from the sheep.
__‘But what of you?’

‘I can take another apprentice,’ he assured her. ‘Weaving is a far more interesting trade—and yields far better coin.’
__She made a noise of agreement. ‘Steady, Cannu!’ The more spirited of the hounds eased away from the stock, glancing sadly at Mellena. Her white coat gleamed in the low light. Mellena would miss her company; and the flock, their dense fragrance, and the scene stretched before her—the tide of hills, rippling out from the Border Mountains standing guard on the horizon.
__Oran spoke carefully: ‘Perhaps next summer we can consider building a house.’
__Mellena broke from her reverie, inwardly startled.
__‘The shepherd’s hut is hardly suited to family life, and returning to my parents’ each winter wears thin.’
__‘“Family life”?’ she echoed.
__‘Well,’ he smiled, ‘If we keep on, I suppose there might be more of us in time?’
__The hope in his voice struck her with foreboding. She had told him several times of Ànlisia’s provision of Lover’s Friend… She had no reply.
__And her silence unsettled him.
__‘Let us lay such brevity aside,’ he hastened. ‘Kengar offers you an excellent trade, and a useful one, even in the humble management of sheep and land.’
__‘Yes,’ she smiled.
__Encouraged, he moved his shepherd’s crook to his right hand and took hers with his left.
__‘You are right; Kengar has much to offer. When we find you a new apprentice, I will dedicate my time to weaving.’
__He squeezed her hand proudly. She returned the pressure, then promptly released her grip.

Two evenings later, Kesia felt bothered by Mellena’s account of the exchange. ‘I thought you were entirely taken by him?’
__‘Until the mention of multiplying, I was.’
__This seemed unfair. The two had known each other since childhood, and had been an item for months; of course his affections would turn his mind to the future. ‘What were your thoughts before now?’
__‘Simply to enjoy his company!’ She slid the candle-holder toward her, frowning at its flame. ‘To let it unfold as it would naturally, allowing time to decide our path.’
__‘And now?’
__Mellena sighed. ‘And now, prepare him to go without me, resuming my training with Kengar directly—by month’s end. Perhaps time apart will calm him.’
__‘He isn’t blinded by passion. He—he loves you.’
__ The flame of the candle doubled in size. ‘It seems absurd to suggest children and marriage are the natural and immediate outcome of love.’
__Kesia recoiled slightly. ‘Perhaps not immediate, but certainly natural.’
__ Mellena turned her eyes to the roof. ‘I know most seek marriage after coming of age, and it is fine—’ the flame was now four inches high, consuming the wax with speed.
__‘—Stop it!’ Kesia interrupted, fixed on the candle. ‘You’ll scorch the table!’
__Mellena became aware of her actions, relinquishing her grip on the fire. ‘Look: Lasair openly wants a husband, and perhaps you have hope of Toran; but I intend to travel, perhaps even to family in Ona. I should like to do so as a weaver.’
__Kesia bristled at the remark about Toran. ‘I intend to travel, as well you know. I thought we planned to journey together.’
__‘Our plans have been constantly interrupted, thanks to your uncle.’
__Heat rose along Kesia’s cheeks. ‘You are not alone in your frustrations. I cannot answer for my uncle.’
__‘No—and nor will he. No explanations!’
__‘His work drew him away!’ Kesia sat back in her chair. ‘You are annoyed by Oran, not Kengar or myself. We have no need to argue. And don’t burn my furniture.’
__‘Fine. Sorry.’ Mellena slipped into thought, scratching at the unmarked table. ‘We should travel again.’ Mellena smirked. ‘If you aren’t cross.’
__‘Just go easy on Oran.’ Kesia exhaled, glad the tension had ebbed. ‘You can travel with Toran and I to Alendae next month, if you like. I have orders to deliver; we can pillage the markets with the proceeds. I heard you shepherds make pittance.’
__Mellena lit up.