Custodin Màtac had ordered the Beran to convene. Brennan awaited his conviction in the dungeons, their sunless confines and silent guards offering little information on the progress of his trial. Countless times he had implored Sevína to come—grasping his amethyst anklet interwoven with a plait of her hair—but his summons had gone unanswered. 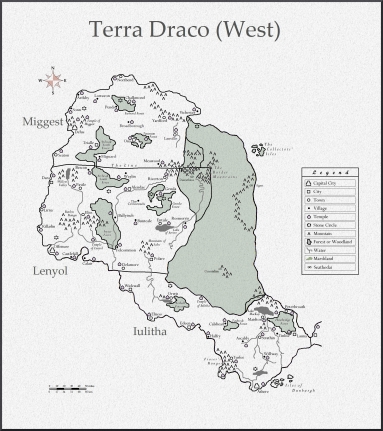 Above, where three days had passed, the Beran debated Brennan’s fate. High Weaver Quinlan had called on Kengar the night of Brennan’s arrest and took his praise of Brennan’s family and character to the discussions; Kengar himself had departed immediately to alert Daldria and Mitchas of their son’s situation. High Duke Nóe had arrived via the rivers that morning, and Faolan overland from Polar; thus was their party complete, and Màtac’s sentence close at hand. Régan prowled in the wings.
‘The penalty for High Treason is execution.’ Alsandul’s soft voice brought quiet to the table. ‘Yet executing a Miggestian migrant will have consequences in our agreement with Custodia Galluel.’
__‘Hear, hear!’ Quinlan thumped the table. High Counsellor Maik and High Commander Boadicae nodded.
__Disgruntled noises issued from Nóe and Faolan. Hailen, second of the High Weavers, remained impassive.
__Màtac considered. He eyed Régan. ‘Leave us.’
__The Princess stood and stalked toward the doors, slapping a fear-struck guard in his fumbling and tore the door open herself. Quiet cursing frothed in her wake.
__The door fell closed; the Custodin reopened his eyes; and to the Beran he spoke: ‘The fires will not scorch our vision of a renewed city, nor the misdeeds of servants undermine. Let him be kept here under key, and given to Lady Galluel in March. Guards! Collect him so he might learn that the Golden Throne knows mercy; and let him fear the iron fist of the Miggestian Custodia.’

Kengar had flown on hoof with Mellena, returning through the darkness to Gesula and informing—between Mellena’s distressed interjections—Daldria and Mitchas of Brennan’s incarceration. Daldria had departed immediately, in the heart of night and with little provisions, to find her son’s side. Kengar had beseeched her to remain, or at least wait for the clarity of morning, but when she bit his hand as he grasped her arm he bowed to the resolve of maternal ferocity.
__With darkness still cloaking the town, Kengar led Mitchas and Mellena to his own home for concealment. There they would remain while Kengar returned to the capital—excluded from the trial, but given hallway reports by Quinlan, then faithfully relayed to a most anxious sister and father a hundred and fifty miles away.

High Priestess Sevína’s consecration was complete, and she began her duties in earnest; but the burning at her ankle drained her attention, and however many yards she traversed of the Palace halls, Vilsonius and his ring were far beyond her reach.

Brennan stood alone before the Throne. The Custodin and Beran pressed upon him in its impressive entirety. Régan—hawk in eye and countenance—observed from stage left, perched on the edge of the dais. Kengar had been admitted also and watched from his place by the door.
__‘You are charged with High Treason for possessing the Charge of Darkness and bringing the written word of the Black Dragon into Lenyol’s domain—of which I am custodian—and into the castle itself. Your post as First Assistant to my heir does nothing to lessen the brevity of this charge.’
__Brennan quivered.
__‘The punishment for High Treason is execution. However, as you are not born of this region, your life is perhaps not mine to take; thus will you be handed to Custodia Galluel in autumn, and be submitted to her will for judgement.’
__Brennan sank to his knees. ‘Thank you.’ He clenched his ankle. ‘Your Majesty, my Lord, you are merciful.’
__Màtac nodded with pride. A draft then swept his hair, burgeoning into a breeze; and wisps of purple smoke spiralled, giving way to a shorn-headed woman in black robes. She assessed the scene—the throne, nobles flanking it, Brennan’s kneeling before them—and cried out, ‘Brennan, my love, you should have fled when you could!’—and took his hands, lifting him.
__And there Régan growled: ‘You philandering fool, was a Princess not enough?’ She drew her bow and arrows from beneath her skirts and released her scorn, piercing Brennan in the heart under Sevína’s scream and within the disintegrating violet haze which consumed and removed them from Offenure Castle.

One thought on “Chapter Eleven: Tempest §1”